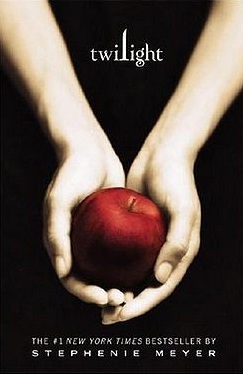 I slide the book over the counter, cover down, and look at the cashier. A middle-aged woman – very short red hair, glasses, and the distinct air of a book-snob about her – looks back at me. My ruse hasn’t worked. She knows immediately what I’m buying. My mind is racing, imagining that the only thing that’s keeping her from saying something is the fact that the copy of Twilight that I’m about to buy is in English while she is German. I want to blurt out that I’m buying this thing, this literary abomination, for the sake of an experiment. For the sake of science, so to speak. Really quite self-sacrificial of me. But in the end I don’t say anything, not even hello/thank you/goodbye. Better to let her think I don’t speak German.

Outside of the bookstore I don’t have much time to look at the slim paperback that I just bought. I need to meet someone and I’m in a hurry. Also I’m not that keen on actually starting this little experiment of mine. Someone could get hurt.

My brain, for example.

Rewind… I’d seen Twilight: New Moon a while ago and thought that it had possibly set a new record for storyline-atrocity. But only just possibly, there’s always Bloom. Looked good though, can’t deny that. And then there was the thing with the other readers, sane people one and all, people whose judgement I trust, people who seem to have taste (you know who you are). And they had read Twilight. And New Moon. And the rest. Not only had they survived the experience, they had also said things like “reads well” or “it’s sort of fun, in a guilty pleasure kind of way”. And that planted the seed of doubt. Twilight, scourge of high fantasy, read by millions upon millions of teenagers. Was it really that bad? Did I have a right to participate in the ongoing Twilight discussion trashing without having read a single word of it? Does Bella Swan have a single redeeming feature? I don’t believe in guilty pleasure, at least not very much. If someone says something is a guilty pleasure he or she usually means that it is good, but doesn’t want to admit to thinking that in the company of others. Here in Germany Harry Potter is a guilty pleasure, see?

We have a saying in Germany which roughly translates as “eat shit, millions of flies can’t be wrong”. It doesn’t translate very well, but still serves to illustrate what is at the core of this little experiment: What if millions of flies aren’t wrong?

Back to Day 1: I meet the person I was going to meet and get a very disapproving frown when I mention what I have just done. Twilight, well actually fantasy literature as a whole, has a bad standing in Germany. Escapism, nonsense, childishness, these words are spoken much quicker and with less kindness here in the country of sheep. Intellectual people read suspense novels, because when the gardener kills Lord Adolfstein by shoving him into the paper shredder that’s, like, real, you know.

I’ve heard all of it before and gotten inured to the attacks of the literary elite by now. Still I try to explain. “It’s because I finally want to have an informed opinion. I don’t want to be talking out of my arse all the time.” Only three days later I will be ready to launch into a well-rehearsed speech on the subject of why reading Twilight was such a spiffing idea.

In the train on the way home, I open the book for the first time. I keep it on my lap, bending over in order to still be able to read. The cover of the German edition is identical to the English one; if I hold the book up like I normally would, people might notice what I’m reading.

I only skim the acknowledgements. Usually not my style, I tend to assume that authors have put some thought into whom they thank, but Stephenie Meyers’ acknowledgements are longer than some books I’ve read. It takes Jonas to point out that she thanks her “online family” at fansofrealitytv.com. That explains so much.

“I stared without breathing across the long room, into the dark eyes of the hunter, and he looked pleasantly back at me.”

It’s not the first sentence of the book, that honour goes to something bland and incredibly convoluted, but if it were it would easily win the Bulwer-Lytton Fiction Contest, probably for several years in a row. It’s just that kind of sentence. I can’t even begin to describe what is wrong with it, there’s just too much, although the part about “pleasantly looking back” certainly makes up a good deal of the overall horribleness.

Two paragraphs down, 434 pages to go. Suddenly I’m not sure if I can do this. Yet I turn the page and read on. Once I’m in the flow it isn’t too bad. The atrocities keep coming, but they somehow get drowned out by all the filler. And there’s a lot of that. Mostly descriptions of how Bella hates the world in general and human beings specifically. Such a charming, vivacious personality! I already want to adopt her. Still, the filler isn’t thick enough to submerge the very, very frequent descriptions of Edward’s attractive voice. And his attractive skin. And attractive hair. He probably also has attractive shoelaces, but before I get to that part I need to stop reading in order to get off the train. I’m glad to stop – this book is so full of attractiveness that it makes my brain ache.

I have done my scientific duty for today. It doesn’t make me feel great, but at least I don’t feel too dirty.

7 thoughts on “The Twilight Experiment: Day 1”