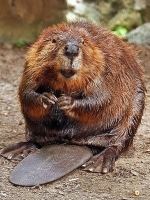 So I’m reading A Son of the Circus by John Irving right now. I used to love Irving, but as I grow older (and have more Irving reading experience) my opinion of his books has shifted from “wow, this is some crazy imaginative shit” to “oh bother… another story about bears, midgets, rape and weird sexual disorders.” Irving is the Joseph Beuys of the writing world, and his fat and honey are bears and prostitutes. I suspect a lot of people feel that way. The rest probably haven’t been paying attention.

I have, at this point, read 30 pages of A Son of the Circus, and although the story hasn’t even properly begun yet, the book is already worthy of review.

The circus referred to in the title is an Indian circus, so this book’s ursine content is probably relatively low. As a matter of fact that’s the reason why I chose this novel over the other Irvings that are still loitering in our bookshelf, a low bear quota is always a plus. It’s got midgets, though. Let’s see how Irving will manage to annoy me with those.

For now I have two other bones to pick with this novel. One of them, the smaller bone, is that the book is set in India (a country in which Irving has spent under a month in his entire life) and has an Indian protagonist who was schooled in Austria (another Irving favourite) and lives in Canada. And like all good transcultural protagonists he’s uncomfortable in Canada, feels alienated in India, and is generally at odds with where he belongs and who he is. And while I’m sure that there are plenty of similar people out there, people who for one reason or another have left their country of origin and now have trouble settling down and adjusting to a foreign culture, I think that this has become such a cliché of modern writing that it should be outlawed. Ask anyone who’s studied English Lit with a focus on transcultural studies. If they’re clever they’ll tell you that you can’t poke a stick at a writers’ conference without hitting someone who’s written extensively and stereotypically about this subject. If they’re less clever they’ll tell you that Mr. Irving is writing the shocking truth about these poor, uprooted people.

But that’s a minor complaint. Here’s the bigger one:

The 30 pages of A Son of the Circus that I’ve read make up three chapters. The first one concerns itself with how wonderfully quirky and eccentric (with just the right dash of melancholic) our protagonist, Dr. Farrokh Daruwalla, is. And that’s okay. The second one briefly tells the story of Farrokh’s best friend, a dwarf, and how they met. Then, somewhat less briefly, it relates the story of how Farrokh once broke his nose on his best friend’s wife’s vagina while in a trapeze safety net. See what’s wrong with that? A lot, seems to be what comes to mind. And it gets better. Chapter three is all about Farrokh being at a private golf club and contemplating an image of the founder’s wife, Mrs. Duckworth. Mrs. D., now long deceased, apparently had a slight problem with exhibitionism. And Farrokh, his imagination now sufficiently fueled by this titillating bit of information, spends about five pages musing about the feel, bounciness and general aerodynamics of Mrs. Duckworth’s breasts. Now… see what’s wrong with that?

I’ll tell you. Why, for the love of all that’s good, do modern writers need to obsess about sex like that? I’m not a prude, really, but I find this fixation somewhat disturbing. What happened to good old “plot”? Rhetorical question, I fear. Plot’s out of fashion, because plot means talking about the world, and civilisation, and meaning. Maybe even politics (gasp!). So instead sex has become the written equivalent of what in theatre is “naked man and a projection”. It’s what once was new and daring, something to shock the elderly out of their stupor, and what’s now so commonplace that it has become the new establishment. Absurdly, sex has become safe, and plot has become something uncomfortable. This isn’t the first time I’ve noticed this, Solar by Ian McEwan had similar problems, but this morning while talking to Jonas I suddenly happened across the explanation. And I was astounded. It’s nothing but fear of plot. A story allergy. A postmodern disease, if you will. It permeates modern literature and sucks all meaning out of novels. I wonder what Freud would make of this.

Now, I’m not saying that A Son of the Circus isn’t still going to get around to having a little bit of plot, if there’s time between Farrokh thinking randy thoughts and all the embarrassing accidents that are bound to ensue, but I still think the absolute vacuum of meaning generated by these opening chapters is worth noting. I’ll continue reading, if only because I hate not finishing a book. Check back in a week or so to see how it went.

4 thoughts on “No Bears But Lots of Beaver”