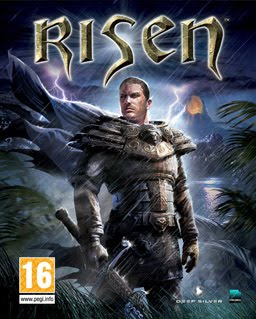 Just in case any of you have been wondering why I haven’t updated the blog in nearly a week… the reason is called Risen.

Risen in the new game by German developer Piranha Bytes, the makers of Gothic 1 & 2. They are also, unfortunately, the makers of Gothic 3, a game which is pretty high on my list of things that I should undo if I ever were to get access to a time machine. (There’s other stuff higher on the list, but not much.)

Jonas and I bought the game about ten days ago and it is fair to say that it is slightly addictive. Jonas is good about stuff like that, he can still function normally in the presence of a good game. When I’m playing  a good RPG the only way to get me to do something else than play usually involves a crowbar.

Anyway… I solemnly promise to write a more detailed review of Risen when I’m done with the game, which should be in another few days, but for now I just want to say that Piranha Bytes have truly managed to redeem themselves.

It is true: after Gothic 3 I thought they had lost their minds and that putting them in an insane asylum, a really old-fashioned one without any computers, would be a splendid precaution.

But Risen makes more than up for the agony that Gothic 3 has inflicted on us. They graphics are beautiful. The fighting system is well balanced. Levelling is once again something to look forward too. You can climb (big, wonderful bonus!). And the story is sounding good so far.

Last but not least: the game is a Gothic game in all but name. There are a lot of small nods to the Gothic franchise and even the story seems to be based, at least partly, on one of the possible endings of Gothic 3. (No, this is not a spoiler. You get the relevant info in the first cut scene of the game and if you’re concerned that this might spoil your Gothic 3 experience: don’t, the game manages to do that on its own, it doesn’t need my help for that.)

Also, miracles never cease, the game seems to be pretty much bug free. There seem to be certain issues with a few types of graphics cards, but neither of us are affected by that and in any case there’s a patch out already that fixes it. The only other bug I have encountered is rather beneficial to the player, so I won’t complain.

So yay for Piranha Bytes and Risen on all counts. A more detailed review shall follow soon.