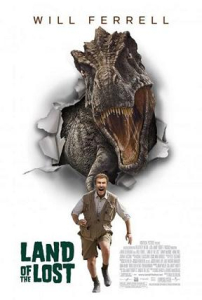 On Wednesday we saw Land of the Lost. And that’s two hours of my life I won’t ever get back. Only it felt more like seventeen.

Why did we go to see that movie, I hear you ask. Did we not see the trailer? Did we not read the reviews? Have we lost our minds? Has our sanity deserted us? Should I maybe stop with the rhetorics and give you a straight answer?

Yes, we did see the trailer, and I admit that it was dreadful. And yes, we read the reviews, and they didn’t sound good either. But trailers can be misleading. (Okay, I’ll admit it, usually in a bad way – I’m thinking of Planet of the Apes here). And if I were to recount all the times in recent years when we absolutely loved a movie that had been trashed to tiny little bits by the reviews, this would be a much longer article.

The chief reason why we went to see Land of the Lost was that its director, Brad Silberling, has done some very impressive movies in the past. Moonlight Mile is one of Jonas’s favourite movies ever and both City of Angels and Lemony Snicket were pretty damn good. (I also loved Caspar to bits, but that was when I was fifteen.)

As for Land of the Lost: You got a director of proven brilliance, dinosaurs, time travel, A Chorus Line, parallel dimensions, lizard people, very good sets and locations and the producer of Eva Longoria Sex Tape as one of the screenwriters. What could possibly go wrong?

Mhm… reading what I just wrote, I can see the flaw in my argument. It’s called Chris Henchy. Not that I don’t think that his colleague, Mr. Alex McNicholas, isn’t equally responsible for this cinematical disaster. (Also he’s one of the staff writers for Saturday Night Live, which makes me think that the casting of SNL regular Jorma Taccone in the role of Cha-Ka the Eternally Awful might be his bad.)

It’s not just that the movie is incoherent – which it is, extensively so. Incoherent to the point where, in the very beginning, I was wondering if we were seeing a damaged cut or if the projectionist had once again mixed up the reels. (It happens. I spent most of my youth thinking that Pretty Woman was a postmodern masterpiece due to such a mistake.)

It’s also not exclusively due to the fact that it has enough poo and sex jokes to make Adam Sandler sick to the stomach. (Sex and poo joke density was measured at 11.73 on a scale of 1 to 10.)

Neither is it that the actors are telephoning in their lines. (Not true, I think they might have been using morse code.)

We’re talking bad here on a level of  “the rustling of the popcorn bag in the row behind us was more interesting than the dialogue.” And I wish I was kidding, I really do.

The plot had more holes than a sieve. The parts that did make sense (in the broadest of terms) were boring. No, it’s not a good idea to have a ten minute speech about the true value of friendship, loyalty and love when a T-Rex is standing right next to you. And french kissing a monkey is not funny. Neither is A Chorus Line, at least not inherently so. (I love the show though, second musical  I ever saw.)  And I don’t want to see Anna Friel’s legs ever again. And the same goes for Cha-Ka, now officially the most terrible, awful, disgusting, dislikeable and stupid movie character ever. If Mr. Taccone would please contact me I’d be happy to give him his award, delivered speedily and with great precision through the barrel of a shotgun.

I can only conclude that Brad Silberling made this movie after falling on very hard times. Maybe he has gambling debts, borrowed money from the wrong people, now the Mafia is after him. He needs money, as quick as possible. Haunted, alone, a prize set on his head, dead or alive, his only chance is to direct a movie. Nothing matters, only the paycheck that will finally get the bounty hunters off his ass. So he does it. He directs Land of the Lost, forever ruining his career, but saving his live in the process. That has to be it. There is no other explanation.

The only question that remains now is this: has he never heard of Alan Smithee?