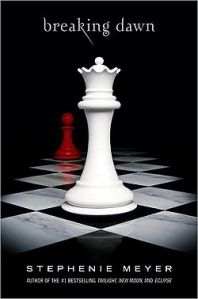 Rejoice! I’ve decided to do three reviews about the last book of the Twilight series, not just two as with the others. It’s longer, it’s much worse than the other three, and it’s split into three parts anyway. All wonderful reasons for my decision.

This also gives me the chance to say something about the second book, New Moon, that had escaped my attention so far. I was sitting at my computer late one night, thinking about how Stephenie is really sort of (ret)conning the reader when it comes to her werewolves. I think I need to go into the plot a little. At some point in Eclipse, or it might be the end of New Moon, I’m really too lazy to look it up right now, Edward tells Bella that it’s her fault that all those strapping Quileute boys started turning into big cuddle-wolfsies. She replies that he is an idiot (which would be the first true observation that Bella has made or will make in the books) and tells him that Jacob thinks that the werewolves started to change because the vampires came back to Forks. Somewhen after the events in Twilight, I assume, since Jacob shows up at the end of that one and everything is still right as rain, no torn shorts in sight yet. That puts us somewhen in the beginning of New Moon, yes? Mhm… so the werewolves started to change back when Edward and his family had skipped town to get rid of Bells? Yes, you heard right. Jacob thinks that the presence of the Cullens caused him and his biceps-studded friends to change, but if I am not very much mistaken Edward had already left town for quite a while when Sam Uley turned, not to speak of all the others. Mhm… is that scuttling sound I hear faintly in the distance maybe Stephenie slinking off to hide under a rock somewhere? I think it might just be.

Where was I? Yes… Breaking Dawn. 699 pages, 700 if you count the words The End (atom paperback edition). A nice number and one that continues the trend of making the books a little longer with each instalment. It unfortunately also continues the trend of making the plot a little thinner each time we return to Forks, but that only makes my job easier, so why am I complaining?

Breaking Dawn starts off just a few weeks after the events in Eclipse. Bella is, sadly, still alive and set to marry the vampire of her heart in just a few days. She’s also driving a Mercedes Guardian (a semi-fictional car, for those of you who are wondering about that as well; apparently Stephenie is referring to the S600 Guard model). Now, I have a big problem with that first chapter. The reason? It’s a bit embarrassing, but here we go: I once tried to write a novel about a clumsy girl. It was about much more than that, of course, but I will still one day write that novel so I won’t tell about what exactly. The thing is that I tried real hard to make the physical aspects of being clumsy funny and it just didn’t work. This first chapter of Breaking Dawn, with all the wheel-screeching and brake-slamming and whimpering, reads a lot like that ill-fated novel of mine, only much worse. It takes a lot of work to make something be funny on  paper that should by rights be in a Buster Keaton movie.

Mhm… yes. After the car scene we move on briskly to the telling-Charlie-scene, which is a flashback and one of the few funny things in the book. Funniness aside, I still have to marvel at all the lovingly hand-crafted inconsistencies that go into every Charlie Swan scene in this book. If the man keeps to one mood for more than half a paragraph it’s a miracle, really. Maybe he’s got bipolar disorder, I hear that’ll do that to you. Or maybe Stephenie just thinks that angry parents are funny and doesn’t want to let the plot get in the way of a “good” joke. You pick.

Soon after, Bella is striding down the altar in a spectacularly ugly wedding dress. Yes, I know, it’s a taste thing. She hasn’t any – that’s the problem, I think. The wedding is done not much later, a surprisingly anti-climactic scene really, given that we’ve been… eh… waiting for this for three entire novels, but then Stephenie has soooooo much more in store for us. Before the post-nuptial fun can begin, however, Jacob shows up and almost kills Bella. What’s a wedding without a bit of good-natured bride-slaughter, eh?

Then the honeymoon, the bit that I’d been looking forward to. Not because I can’t wait for Bella and Edward to finally enter their very own happily-ever-after (frankly all I’m waiting for is for Bella for fall off a cliff), but because of the sex. Yep, you heard me right. Twilight has finally grown up and is now going down the well-trodden softcore-porn path to hell. Sex has been an issue, but never a feature of the novels before that fate-full honeymoon chapter. Edward is afraid that when it comes to eating someone he might have gotten the definition a little wrong. Bella is just horny and doesn’t care about anything except when she’s finally getting laid. Foolish human hormones, as Edward is so fond of saying. Now here’s a little problem: the Twilight vampires are, essentially, frozen in time. Nothing ever changes. Their hair doesn’t grow, their nails don’t lengthen, blood doesn’t run in their veins (instead of blood they have sparkly fairy-dust, I assume). Which raises some interesting questions when it comes to sex, especially if you’re a he-vampire, don’t you think? And don’t get me started about all those foolish human hormones that Edward is so fond of.

So, are we to assume that Edward has had a hard-on for the last hundred odd years or so? Just thinking out loud. What I was really getting at, though, the center-piece of the first part of Breaking Dawn, so to speak, is the morning after.

Bella wakes up after a night filled with hot vampire sex and is happy. Edward is not quite so happy, and soon we find out why. While he hasn’t eaten Bella (in the blood-sucking sense), he’s at least come close to doing so. A sort of post-coital snack, perhaps? He’s also gotten a little carried away (excitable boy, doesn’t know his own strength) and now Bella looks like a smurf only with more hurt and less smurfberries. I’ve just had a very long discussion with Jonas on why this honeymoon-domestic-violence scene makes me react this strongly. There are several reasons, not all of them rational. For one, Twilight is just so incredibly tame, at least so far. Bella and Edward never do more than kiss, and it is a noteworthy event when the fanged-one takes off his shirt in Bella’s presence the night before they get hitched. So this sudden transition from tame to date-rape seems slightly off. Then there’s the fact that afterwards Bella basically lights a metaphorical cigarette and whispers through the equally metaphorical smoke I like it rough honey, let’s do it again.

Now, I know that some people are into that kind of thing, just like some people are into feet or latex or penguins, and there really is nothing wrong with it provided that all participants are okay with it, but in this case it seems… strange. And wrong. It also seems to suggest that anything more than kissing before you get married is a sin paramount even to premeditated murder, whereas a little post-nuptial wife-beating is totally cool. A (male) friend of ours once told me that this scene makes him angry because it seems to say that sexual violence is okay as long as you’re married and that it also seems to be saying some rather nasty things about males in general. So at least I’m not alone there. All in all, the whole vampire-human sex thing seems wrong. Wrong in how it clashes with the fuzzy safe-not-sexy logic of the rest of the series. Wrong in how Bella reacts to it. Maybe I’m being hypocritical.

The rest of the first part is relatively brief. Edward tries not to have sex with Bella and ultimately fails. Bella tries to have sex with Edward and… well, you guessed it. A mysterious old Native South American lady enters the scene and casually gives us the solution to all the problems that lie ahead, but no one listens to her because they are too busy (not) having sex. It’s interesting to see that Mysterious Natives are everywhere, though. I mean, it’s a good thing that they’re all so mysterious, otherwise Bella and Eddie would be in a right fix at the end of the book, but still…

In the end Bella discovers that she is pregnant and that opens up a whole new barrel of laughs. But that’s a story for the next part of the Twilight Experiment, in which we will deal not only with the question of whether or not it is a good idea for Bella to spread her genetic heritage, but also with the sheer agony of 200 pages being narrated by the only character that manages to be more obnoxious than Bella Swan: Jacob Black (cue dramatic music).

One thought on “The Twilight Experiment: Day 7”