Although there are still quite a few posts from our time in the Dominican Republic in the pipeline, mostly because our USB stick took a swim in the sea ten days in, the time has come to say some general words about our trip.

First of all: The Dominican Republic is a beautiful country. Stunning white beaches make way for black and ragged volcanic cliffs.  Dense, green junge drops away to reveal the bleached bones of the earth. Little islands, full of palm trees and pelicans rise from the sea, on them painted caves hint of civilizations long gone.

I have never even been near a tropical rainforest in my life and I found the experience absolutely amazing. The beaches were less impressive to me; being married to a Greek person does that to you. I have been to that country a few times and know what a pretty beach looks like, but even the husband, who is a bit jaded when it comes to beaches, had to admit that the Dominican ones were exceptionally beautiful. And despite the poverty I have to say that I was entranced with the colourful buildings. Even a little shack made from corrugated iron, or as the Wikipedia informs me, pailing in the local lingo, tends to be painted beautifully. Blue and yellow, green and pink, orange and purple. They look like rusted gemstones.

The poverty, however, is quite shocking. And it is everywhere, not only in rural areas. Families of four or five live in little shacks, made from pailing or roughly sawn boards, mostly with only one or two rooms. There are windows, but no glass. Dirt floors too, I suspect, although I never got a closer look at one of these. In the region where we were based, the peninsula of Samana, most towns aren’t even connected to the water supply network. (Just spend ten minutes searching the net for the proper term, why doesn’t the English laguage have a nice, short word for that? Even the Germans managed, and German is a bitch.) One day we were driving out of town in a minibus when the driver, a man introduced to us as only as Robinson, pulled over in front of a little shack: corrugated iron, no more than 50 square meters, lots of trash out front. Out run two little girls and the elder one gives him something through the open car window, a wallet, I think.  I can only assume her to be his daughter and this to be his house. Now Robinson works in the tourist industry, he has a steady job that pays even during the off-season, and he has to live in a tiny, rundown house on the outer edge of town. That’s when it really hit me how poor these people are.

Makes you feel bad about going to a place like that. At least we always gave good tips, except to our terror of a maid, who really didn’t deserve one.

Moving on from the depressing stuff.

The hotel was decent. Paradisal grounds and nice buildings. Three restaurants, three pools (which we didn’t use, the ocean was a hundred meters away, for crying out loud), a lake with turtles and a massage therapist, palm trees everywhere. The spacious rooms were in small, two-story buildings, which helped make the place feel less crowded and less, well, huge. What more do you want?

Well… A bathroom ceiling that doesn’t leak as soon as the horizon smells a little like rain. That would be something. Not having to be afraid of the maid. Also nice. Water that doesn’t taste of some unspeakable chemical compound. All these and more would be nice. I’m sure Jonas would also have liked a little more variety in the food. And chocolate cake. Me? I’m an omnivore, I eat anything, but even I have to say that the restaurant food could have been a bit more varied.

Now, I don’t want to sound as if the honeymoon was a complete nightmare. Because it wasn’t.

We went to the national park Los Haitises, which was beautiful. We saw the Cayo Levantado, the famed “Bacardi Island”, a place straight from a glossy travel magazine (or from a TV-spot for Bacardi, thus the name). We went snorkeling and saw giant starfish. I sat on a horse again for the first time in nearly ten years and I went up a path on said horse that no horse should ever have had to navigate. Genetically modified gecko-goat-crossbreeds maybe, but no horses. We bathed underneath a waterfall. I drank a cocktail out of a hacked-open coconut. We went sailing on a catamaran and we went to the longest beach on Samana in a tiny fisherboat. We saw turtles and dolphins, parrots and ostriches, lizards and iguanas, hermit crabs and starfish. And I managed to write a complete, shiny new outline for my next novel. How much more can you ask for on a honeymoon? Non-drippy ceiling, yes, I know. But in the end the good far outweighs the bad. 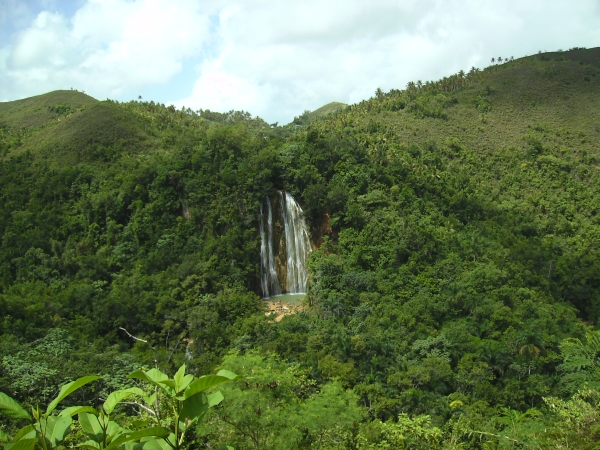 Not going as an all-inclusive tourist would be a plus. Not only because I suspect that these AI hotels cut costs wherever they can and that that badly influenced the quality of the food and drink available, but also because the compulsory AI wristbands mark you out as a gullible tourist for all the world to see.

Learning some Spanish would be good too, because our non-existent grasp of the language often had us in bad situations with people who had a non-existent grasp of any language other than Spanish. With some that just lead to a lot of smiling and pointing, others, the ones a lot more oriented towards making a quick buck, just kept on talking in the hope that we would buy to make them shut up. Both situations were uncomfortable, albeit to varying degrees.

Enterprising locals are a big obstacle to enjoying the Dominican Republic. Not only are they intent on ripping you off, they also try to rip each other off whenever they can. On our trip to the Playa de Rincón, the one in a little fisherboat, we got badly ripped off. We didn’t mind too much, since we were too lazy to haggle and knew that we couldn’t take the money home, couldn’t change it back to Euros and would be going home on the next day. But then the man with whom we had negotiated the trip asked us not to tell the captain of the boat how much we had payed, probably so that he wouldn’t ask for a higher cut. Stuff like that makes me uncomfortable. I don’t like lying and I like lying for strangers even less. Luckily there were other people who managed to balance behaviour like that out. Like Rosy the cafeteria owner or the nice girl from the seafood a la carte restaurant.

But I digress, I was going to wrap this post up.

We had a good time in the Dominican Republic. We went to a country that we had never been to, in a region of the world that we had never been too. We ate foods that we had never eaten before. Saw beautiful landscapes and lots of exotic animals. That is pretty much my definition of a good holiday. Of a good honeymoon too, incidentally. The rest, the bathroom, the maid, the French, that’s all background noise. It annoys you if you concentrate on it, like when you try to sleep and aren’t quite tired enough to ignore the humming of the fridge in the next room, but all in all it stays where it belongs, in the background. And the rest is sunshine and beaches and lizards.

One thought on “The Dominican Republic Experience”