Greek video stores got everything. Every Hammer Horror film ever made, every Asian Disney rip-off you can think of and all the B-movies in the whole wide world.

We like that. On evenings when we’re just not strong enough to sit through three hours of Julia Roberts or Tom Wilkinson looking very serious and not saying a whole lot, when we’ve already seen all the comedy, fantasy & sf and horror movies that are worth watching, there is another kind of horror that lures us in front of the TV-set: the B-movie.

B-movies are the pinnacle of Hollywood entertainment. If you doubt me just take a look at Uwe Boll’s A Tale of the King – A Dungeon Siege Tale and keep your eyes peeled for the plastic Orc-asses. That’s true art.

An added bonus is that every once in a while you’ll actually see something that you’re glad to have seen. Like the recent Syfy Channel miniseries of The Andromeda Strain. Or The Devil’s Tomb (or The Devil’s Tomp as the Greek DVD jacket proudly proclaimed).

Now… let me get this straight: The Devil’s Tomp is not a good movie by any measure. It’s just that given the recent track records of both Cuba “I-haven’t-made-a-good-movie-since-1999” Gooding Jr. and Ron “B-movie-man” Perlman we expected the worst. 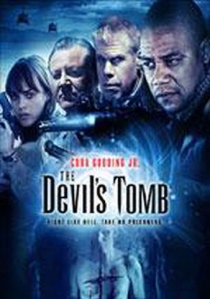 And we didn’t get what we wanted. The Devil’s Tomp is

halfway decent. Good acting, not too ridiculous dialogue. The production values certainly are sound. Of course there is the obligatory hot lesbian sex. I guess there’s some clause in the WGA statutes th

at says that religiously themed horror movies have to have at least one scene containing hot lesbian sex with optional zombie involvement.

Well, that’s it for The Devil’s Tomp. I wouldn’t recommend actually seeing the movie… at least if you don’t feel the urgent need to throw away two hours of your life, but it wasn’t a total loss either. I’ll try to be funnier on the next movie I review… wait a minute. That should be easy. Real easy. Because… 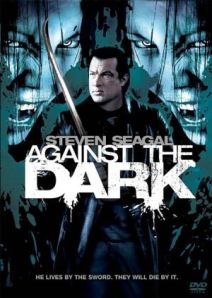 The other movie we saw that fateful night was Against The Dark. Promising title, not very promising, actually decidedly unpromising, cover art. Fat Steven Segal and cartoon vampire vixens that don’t even have the decency to show up in the movie that they’re posing for.

Now, I’m not a Steven Seagal fan. Actually the whole eighties and nineties martial-arts-are-so-cool-shtick largely passed me by. Steven Segal, Chuck Norris, David Carradine… they all came and went without leaving as much as a roundhouse kick to remember them by in my mind. I do think Jet Li is pretty cool though.

So you won’t hear any of that Steven Seagal is one of the grand masters of Hollywood… shame that he doesn’t get appreciated anymore… I still could sense the force of his real talent behind those tacky lines…  Not from me. No way, José. The man is grossly overweight, has the acting ability of a very short plank of wood and should have realized about ten years ago that he’s too old to still have the moves.

There’s an upside to all this: He’s hardly in the movie. That’s the funny part, come to think of it. The movie’s marketing is 120% Seagal-centric. He’s on the cover, the tag line says something very tacky about his sword and how he intends to stick it into vampire-zombies in very creative ways, the plot summary makes you think that he is the only reason the world hasn’t ended yet.

Only that ain’t so. More than half of the movie is dedicated to the story of six or seven survivors of the apocalypse that are stumbling through a disused hospital building and seem to be not very good at anything besides picking their noses while the vampire hordes snack on their mates. And wandering off and getting lost, they’re rather good at that too. In addition the hospital that they are in for some reason has only got one exit (in the underground parking garage, where else) and they absolutely have to get there before the generators shut down and… I don’t really care, to be frank. I only wonder what happened to the concept of ground-floor windows.

At some point Steven Seagal pops up in the company of two leather-clad martial arts vixens that, I wish I was kidding, haven’t got a single line in the movie. Not. A. Single. Line. And they ain’t doing much fighting either. They mostly show their… other talents. (If you know what I mean, nudge nudge, wink wink.)

And that’s it. One would think that the story involves just a teensy bit more than getting out of the door-less hospital of doom, while picking off the characters like tin cans from a fence, but it really doesn’t.

What had us stumped is that Against The Dark even features a few nice shots. And some pretty bizarre scenes. The kind that you’d expect in a nightmare sequence in a Tim Burton movie. That makes you wonder if the screenwriter was thinking of a slightly different kind of movie when he penned the script. It’s hard to describe, but the movie almost feels as if it could be good if only it had been filmed with another genre in mind. And another lead. And different dialogue. And… you get my drift. I’ll leave you with the epically eloquent, artfully articulate first lines of actual dialogue in the movie. Enjoy! They’re, like, awesomely profound: