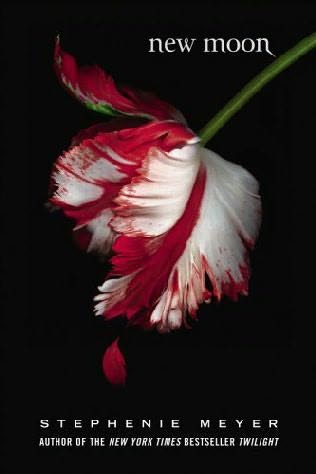 Day Three. The headache has passed. It is my birthday. To celebrate I buy a copy of New Moon. I’m really tempted to skip the second book, seeing as I know the movie and all, but then again, in for a penny…

The second book seems to have the least appeal of all of them. That’s saying something, I know, and you may wonder why I think so. The reason, plain and simple, is that although the first book is dreary and bland and has really, really atrocious descriptions (from the thought processes in Bella’s warped little mind to Edward’s attractive shoelaces to, well, everything), it has one redeeming feature. In the rare moments when the two protagonists are in a good mood, something which never lasts for long in this universe of the perpetually depressed, the dialogue can actually be funny. Not laugh-out-loud funny, but let’s be honest: I’m grasping at straws here. 434 pages. There has to be some good in there. And if I were to be forced at gunpoint to name the best bit about Twilight I’d pick the dialogue. And, to return to the original thought, since I knew that the second book was all about Edward taking off and leaving Bella with the one character that is more ridiculous than herself, Jacob Black, I wasn’t really looking forward to reading about it. Bella was bad enough in the first book, when the love of her dreary little life hadn’t run off to… dunno… be all depressed and emo on a different continent. (The further away from Bella the better, I guess.)

And then there was the thing with Bella going all suicidal on us, over and over again, and never succeeding. If you hate a character with a vengeance this can be very frustrating. A bit like seeing The Care Bears Movie and knowing that all the little blighters will pull through. And boy didn’t I guess what the book had in store for me here…

But, knowing my sacred duty, I sat down and opened up New Moon. (Note the incredibly subtle thing Stephenie is doing with the titles. It’s, like, a progression, dudes. At least it will keep us safe from a sequel. Sunrise doesn’t sound too good. Not if you’re a vampire it doesn’t.)

So. New Moon. Bella is turning eighteen, which is a Problem (note the capital “P”), ’cause Edward is seventeen, you see? Actually… no. Because he’s also 105. And because I’m four years older than my husband and, lo and behold, the world hasn’t ended. If she’s eighteen and he’s seventeen she’s anyway about ten years ahead of him in terms of mental development. No, wait, we’re talking about Bella here, strike that last statement please. And because movies, books and the world in general anyway always tell us that it’s perfectly alright for the guy to be old enough to be his girlfriend’s dad. And just for once I’m going to put my feminist foot down and say that age really doesn’t matter, regardless of who is older than whom. And Bella is a ninny anyway. I rest my case.

Bella is turning eighteen. The Cullens are throwing a little semi-surprise party for her, which wouldn’t be a problem for anyone who isn’t Bella. Since we are dealing with Bella however, we have to read countless sentences about how unfair it is that people are trying to give her presents, how perfect Edward’s shoelaces are and that everyone hates her anyway. For once Bella is right. Not having a party would have been the way to go, because she comes close to slitting her jugular open on a piece of wrapping paper within five seconds of entering the room and Edward’s brother Jasper tries to have her for elevenses.

I put the book down, massage my temples, and remind myself why I am doing this. Only 46 pages into the book it’s going to get worse. A lot worse. If I thought Bella was insufferable before I haven’t read about her after Edward Goody-two-shoes Cullen has pulled a houdini on her because he’s afraid that his family might have her for dinner.

No one can mope like a Bella. Even the book is disgusted with her after a few pages and jumps four months ahead in something that might have been a clever little piece of formatting in any other book. Here it just annoys me. And if I thought I had hit the bottom I was very, very wrong.

There’s a rule in Hollywood or in Authorland… in stories, actually … that dude no. 1 will be the dude at the end of any given story unless he turns out to be a serial killer or a homosexual. Now, from the descriptions of the Twilight vampires the homosexual thing might be open to debate, and Edward has certainly offed a few people in his time, but this is not this kind of story, is it? So introducing the *dramatic music cue* rival is pretty pointless. Especially if he is a dick.

Jacob Black is sixteen going on four. He likes motorcycles, steroids and remarks with enough thinly veiled sexual innuendo to kill an elephant. He’s also a werewolf, but he doesn’t know that yet.

Why Bella would, after having so much trouble with dating a seventeen year old vampire, consider dating a sixteen year old moron is anyone’s best guess.

At first she doesn’t want to have anything to do with him anyway, until… well, until the thing with the motorcycles. Bella wants two motorcycles fixed and Jacob knows about technology, and since Bella is nothing if not exploitative she once again zeroes in on Jacob like a vulture on a fallen baby gazelle. Now, where was I?

You see. I’ve seen the movie. That’s bad enough. There Bella jumps head first into danger and sees Edward’s face and hears his voice and comes to the (perfectly logical) conclusion that she needs to risk her life over and over again for these brief, precious glimpses. Cause anyone would think that, right? And the maddening thing is that she doesn’t even succeed in offing herself. Bella Swan, dead after one and a half books and 566 pages. What a pleasant thought. Doesn’t happen though, so don’t get your hopes up.

But here’s the thing: The woman who wrote the movie script was a genius. She should be awarded a Nobel Prize for Literature (they’re not worth much, anyway). Because what happens in the book is this:

Bella gets into the exact same dangerous situation she gets into in the movie. Sees Edward. Gets a double dose of mope. And goes on with her life as if nothing had happened. And then pages upon pages of mope later she thinks to herself: “You know, Bella-honey, today I really fancy riding a motorbike. I don’t know why, it’s dangerous and I don’t even like the things, but it certainly seems like a spiffing idea all of a sudden. This woman, Stephenie, appeared to me in a dream and said I really should. And I haven’t exploited that stupid Indian kid in such a long time. I think I’m going to buy myself two motorbikes. Yes, two sounds good for me alone.”

And I wish I was kidding.

So she gets the motorcycles, dilapidated enough to get them for free (the bikes, not Bella) and goes off to pester Jacob. Jacob is such an incredible mechanical genius that he manages to fix the bikes up in under a week, cause he knows, like, everything about anything, and in the light of such superior knowledge and bulging biceps Bella begins to fall in love with him. Idiot he may be, but I can still feel pity for him.

That’s as far as I get that day. With Bella beginning to be drawn in by the irresistible gravitational force of Jacob’s abs and no end to the mope in sight (yes, women are good at multitasking, they can mope and fall in love at the same time), I have to give up or be destroyed. One can only take so much stupid in one day.

Tomorrow: Join me for the next installment of the Twilight Experiment, in which we learn that Bella has the power of Selective Disbelief +3.